THE CHURCH OF SAINT NICHOLAS

A timbered church consecrated to St. Michael the Archangel was built in 1605 in the eastern Slovak village of Habura near Medzilaborce. In 1740, it was sold and moved to the nearby village of Malá Polana  where it was consecrated to St. Nicholas Divotvorec ("wonder maker") in 1759. The church belonged to the Greek-Catholic kirk and served its purpose until 1915, when it was severely damaged during the First World War. It was repaired only after the formation of Czechoslovakia, but it was not used since the end of the twentieth century, because at that time the stone church was already built in Malá Polana.
In1934, the church was in very bad condition and its extinction threatened. The construction was therefore offered for purchase in Hradec Králové. The Hradec Králové City Council approved the purchase of a church for twelve thousand Czechoslovak crowns at the suggestion of the town mayor Josef Pilnáček. The church was dismantled during May and June 1935 and transported by rail to Hradec Králové.

Already in the summer of 1935, the church wasin a new "home", in the Jirásek park. After minor modifications, it was ceremonially opened on October 28, 1935, as a monument of the people who died during the First World War.

Renovation of an unique church
The church is a three-part wooden building covered with shingles. Above each part of the building there is a turret, ending with a wooden cupola. The interior of the church is richly decorated with a number of pictures of the saints, called iconostasis. The church premises are enclosed with an original fence with a shingle crown. To the left of the church there is a wooden cross with symbols of the excruciation of Jesus Christ. In 2017, the church has undergone complete renovation, so now it is illuminated with newness. However, the bright color of larch wood will darken  over time due to the weather, Within five years, the wood will turn gray in the weather and in about twenty years the wood should have the dark color that the Hradec people are used to.
The church has been equipped with super modern extinguisher to protect it from destruction, as well. Similar device are just in a few wooden buildings in Central Europe. When the suction device that monitors the interior of the church feels slight smell on two sensors, aspecial gas will begin to flow into the object to destroy the fire already in its initial phase. Tubes and gas tanks are sophistically placed under the shell of the all-wood construction. An interesting element, which was found almost a hundred years after the relocation of the church from Slovakia, is the millstone under the sacred prestol, the altar of the Orthodox Church, which is the symbol of life.

The church belongs to the group of Slovak timbered churches, of which the eight most valuable ones were included in list of UNESCO. The Hradec church did not appear on it because it is not located in its typical place. Its great value, nevertheless, is documented by wall paintings found on the perimeter walls after removal of the iconostasis. The painted beams picture biblical scenes, such as the Last Supper of the Lord. However, they are incomplete. The Cyrillic inscriptions, written in the Old Slavonic language of the 16th century can be seen on some of them. 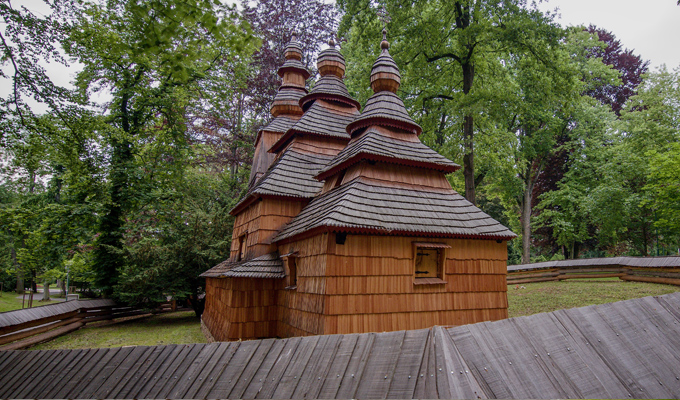